Singapore has the best street trees, from anywhere I have seen. These rain trees (Samanea saman) look like giant bonsai plants. They are stunning and mysterious, they look like fancy horticulture, but their shape and short stature also make you want to climb and play on them. 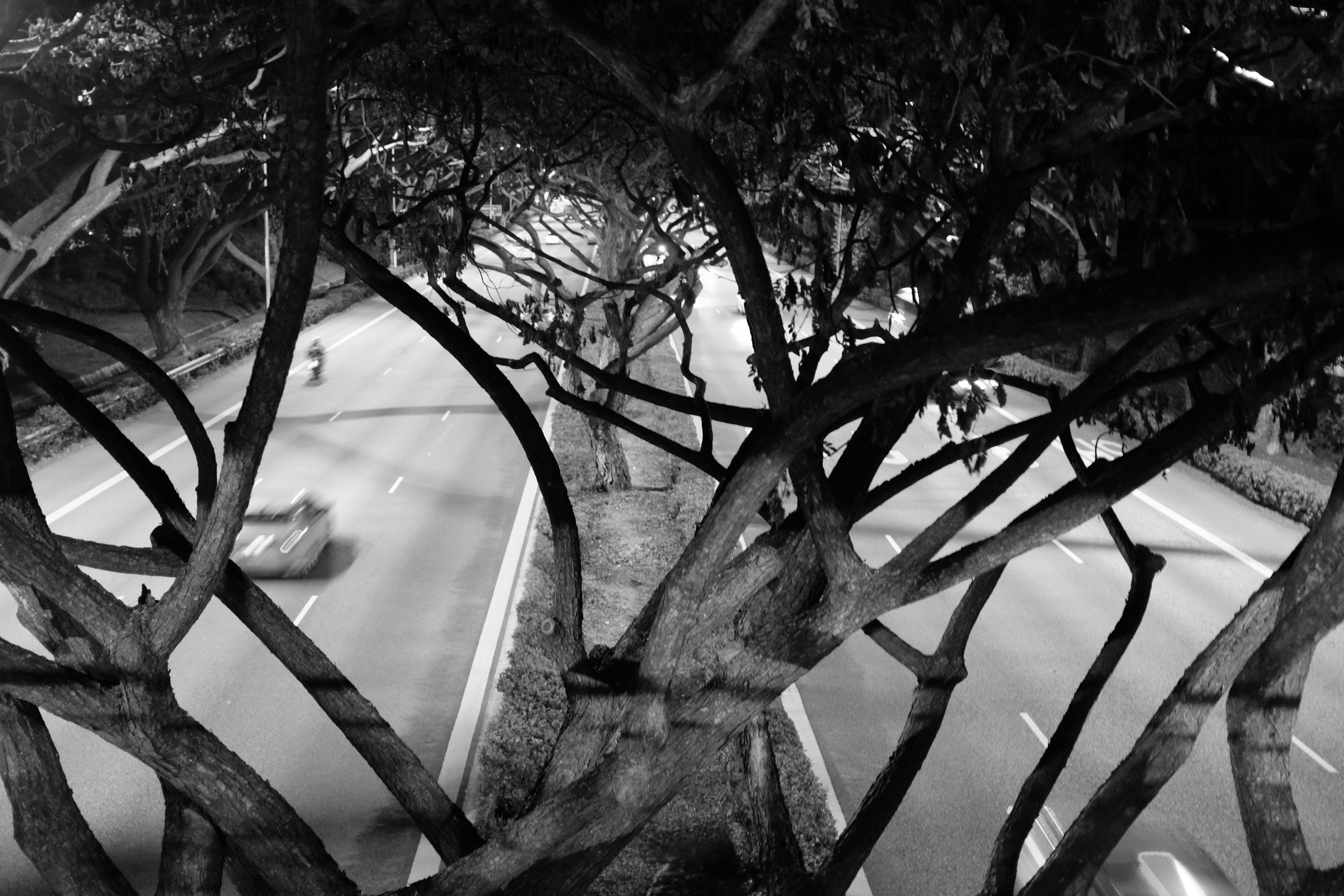 This version of street trees that I saw in Hamner Springs, New Zealand was intriguing. I've never seen trees planted directly into a road before - no planters, no median, just straight in. I'm curious how they've managed to keep the roots from splitting the pavement. It's super minimalist. The cars park between the trees, it creates at least a little bit of a balance between machine and nature, and keeps the footpaths clear of obstructions for pedestrian. 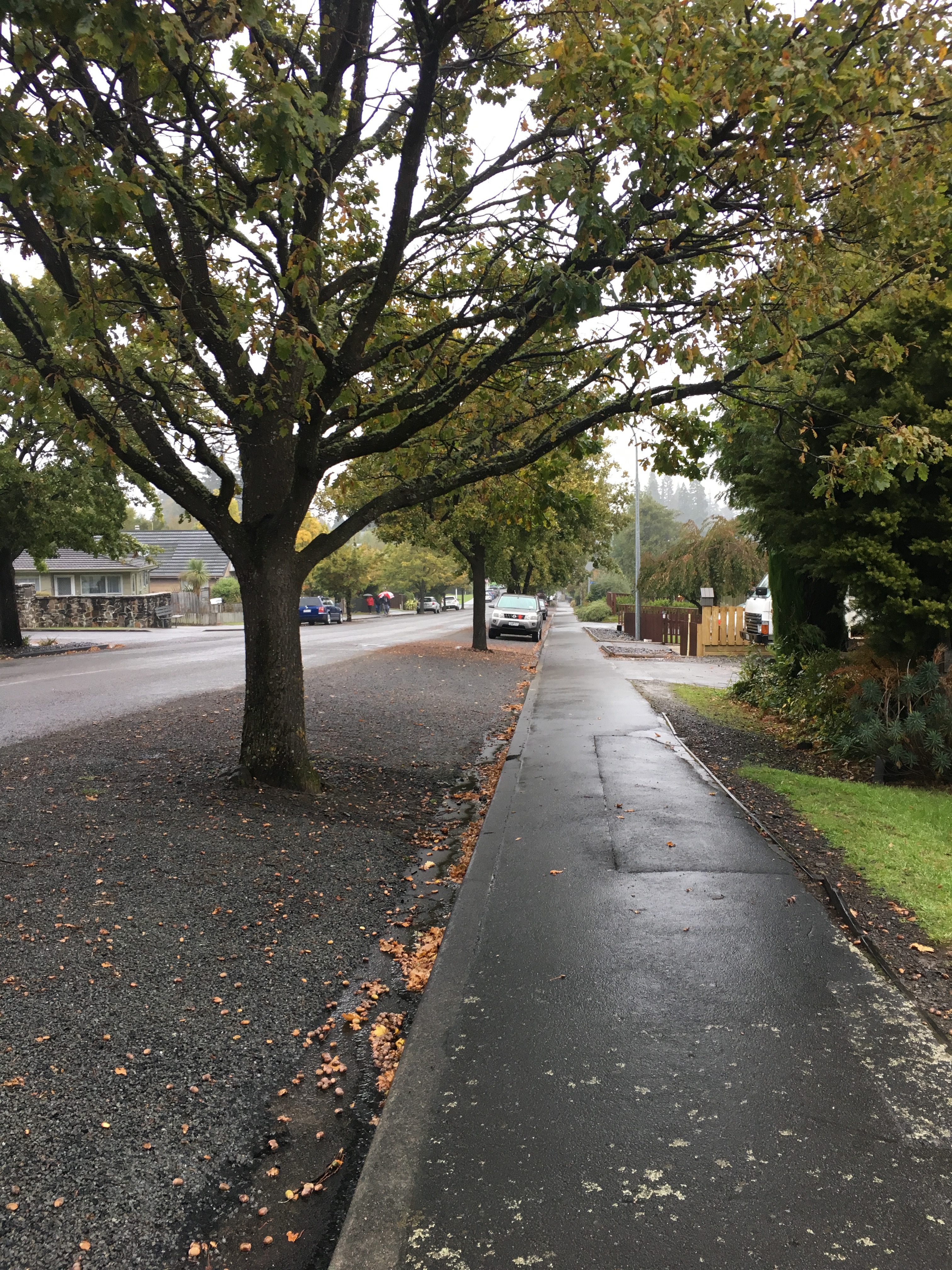 And for those who aren't sure about the value of shade, see below picture: 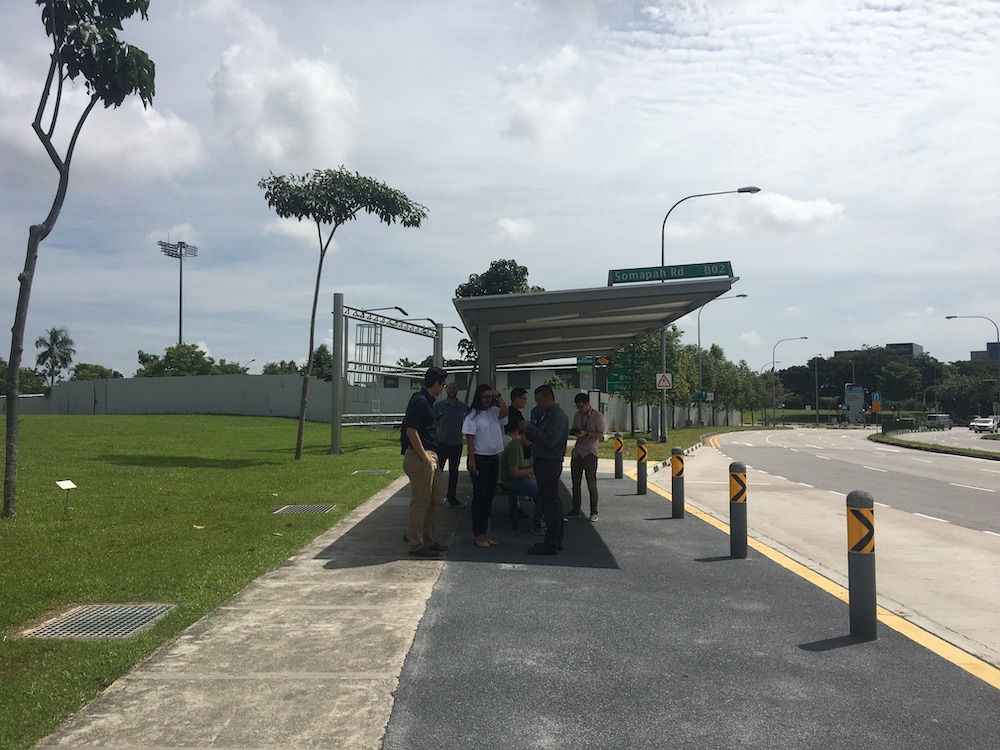 When we think about bicycles and pedestrians, one topic that often comes up is how expensive and difficult it is to create new infrastructure. A couple of examples of how this can actually be done quite simply, especially in roadways that are wider than they need to be. Wide roads encourage speeding, which is dangerous in neighborhoods, especially for children, older adults and pets, and is also loud and just overall not very pleasant. This photo is from a little city in western Japan called Kanazawa. We took the super fast shinkansen bullet train from Tokyo, en route to Kyoto. 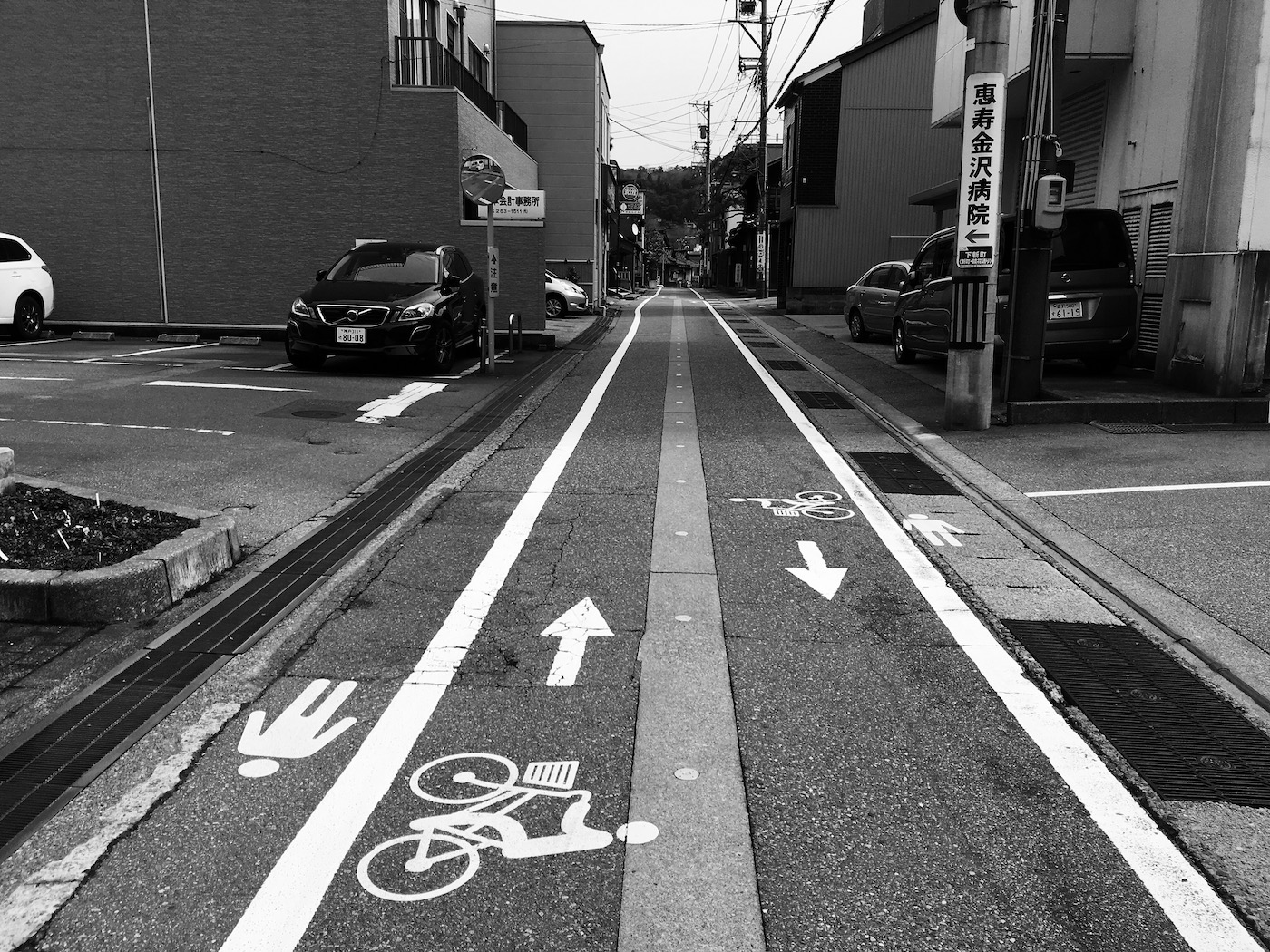 Another one from the southern Taiwanese city of Kaohsiung. 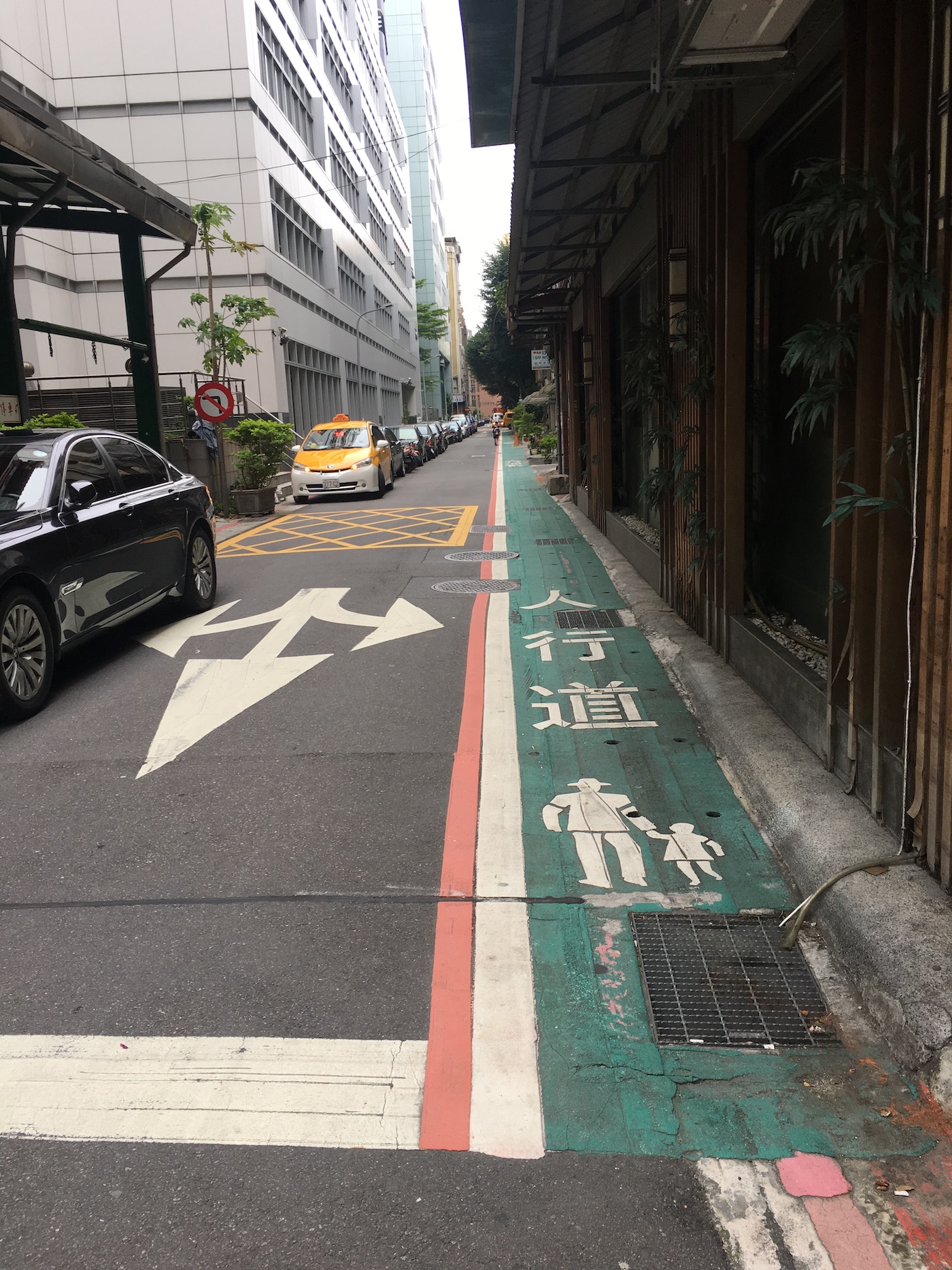 Of course, Singapore does everything a bit more...polished / heavy handed / structural. You can see here where they've laid temporary plates (they're square, about 9 meters square each) on top of the road, and then added a curb to it to create a pedestrian footpath where once there was none. These plates are fairly easy to move and reconfigure, which is a good way to respond to changing infrastructural needs. 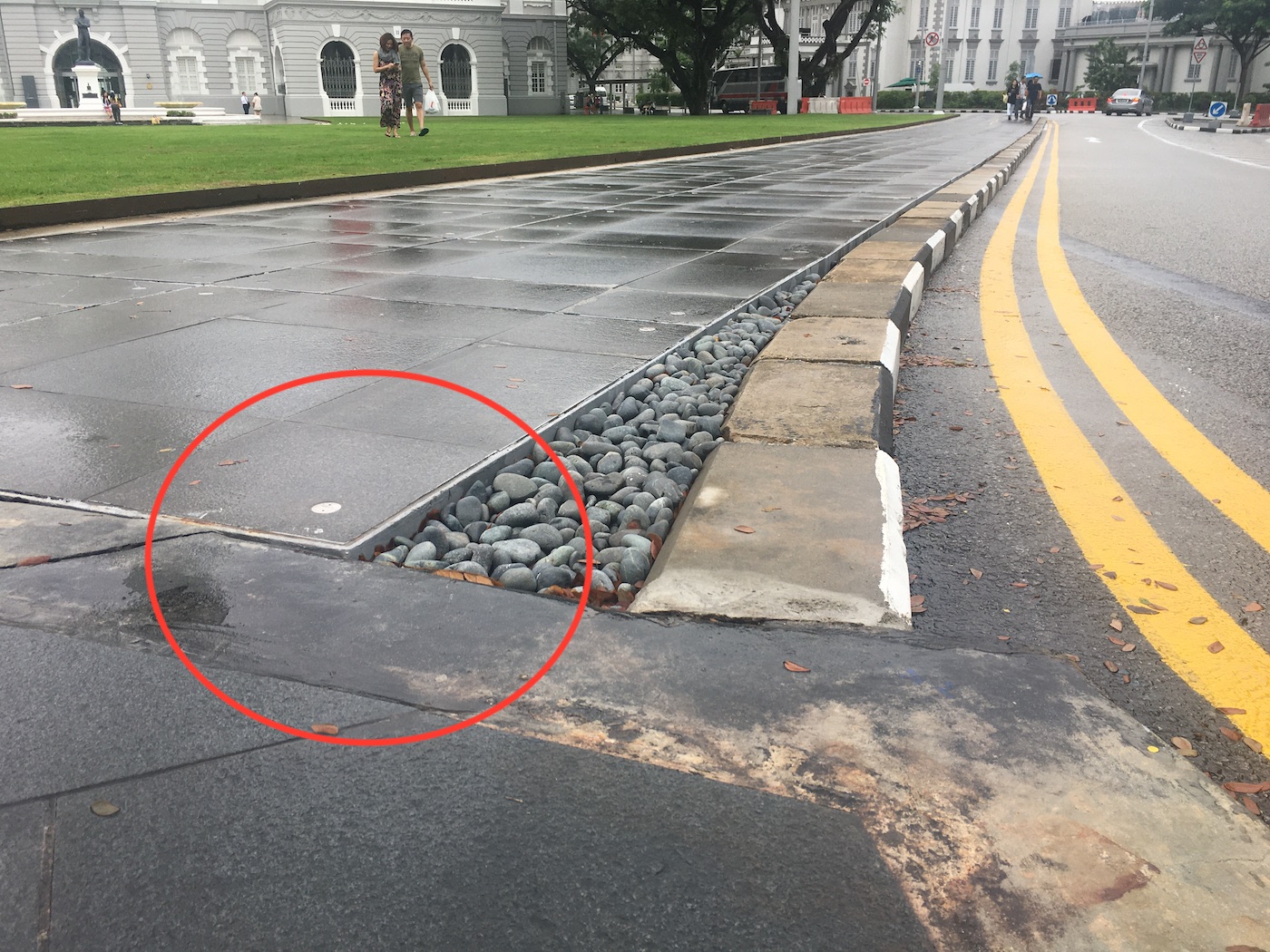 Another example from Singapore, showing the need for this type of flexible reconfiguration of our streets. This is a four lane road (two lanes in each direction), with a landscaped buffer and a sidewalk. Somehow the landscaping zone looks three times as wide as the sidewalk, which can barely fit two people walking side by side. While the car lanes are so wide that the blue taxi hardly takes up 2/3 of the lane width. 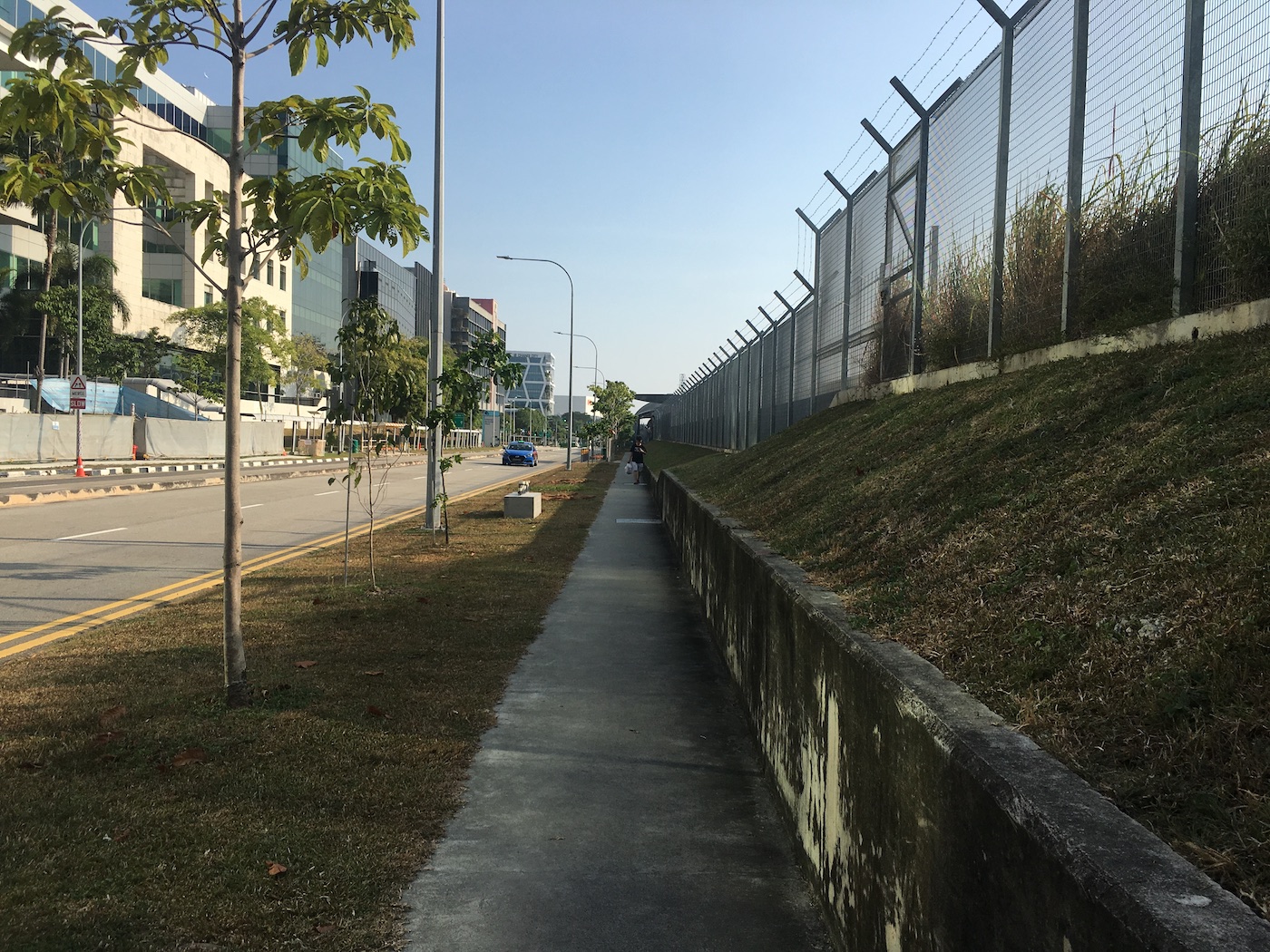 I like this online tool called Streetmix, which allows you to play around with street reconfigurations, adding/removing/widening different types of lanes and streetscape elements. I tried it out for the street that I live on, and I may be biased, but it convinced me that we could have a way better functioning transportation network without having to widen a single road.

People love their phones. Apple screen time tells me I spent several hours a day on my phone, most of it on Safari, Words with Friends, NYTimes Crossword and Twitter, in that order.

Over New Years Eve in downtown Singapore, the lights from everyone using their phone to record the fireworks were almost as bright as the fireworks themselves. 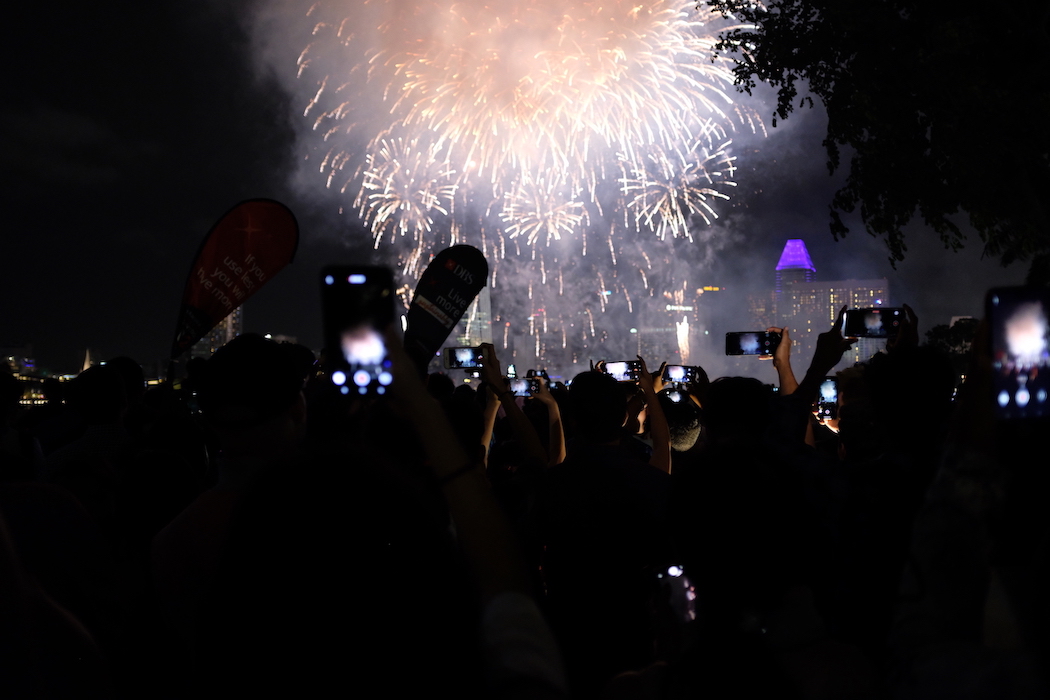 Arguably, at least WhatsApping has some sort of utilitarian function with some level of time sensitivity. What doesn’t have any utilitarian function? Watching TV on your phone while walking. I once followed a guy all the way home from the grocery store - a good 10 minute walk - where he was watching a Chinese drama the entire time. Someone playing shooter games on their phone once walked directly into me (I guess I could have moved, but I didn’t). Chewing gum and walking at the same time? That’s child’s play, boomer. Now it’s watching TV, video chatting, AND making instastories at the same time while walking.

Enough accidents were happening that cities have actually started building crossing lights into the pavement, so that people who are looking down at their phones don’t accidentally walk into traffic. Honestly, if it’s illegal text and drive, or text and bike, I don’t think you should be able to text and walk. I get that cars are way more dangerous, but never forget the impact an idiot on two feet can have while not paying attention. 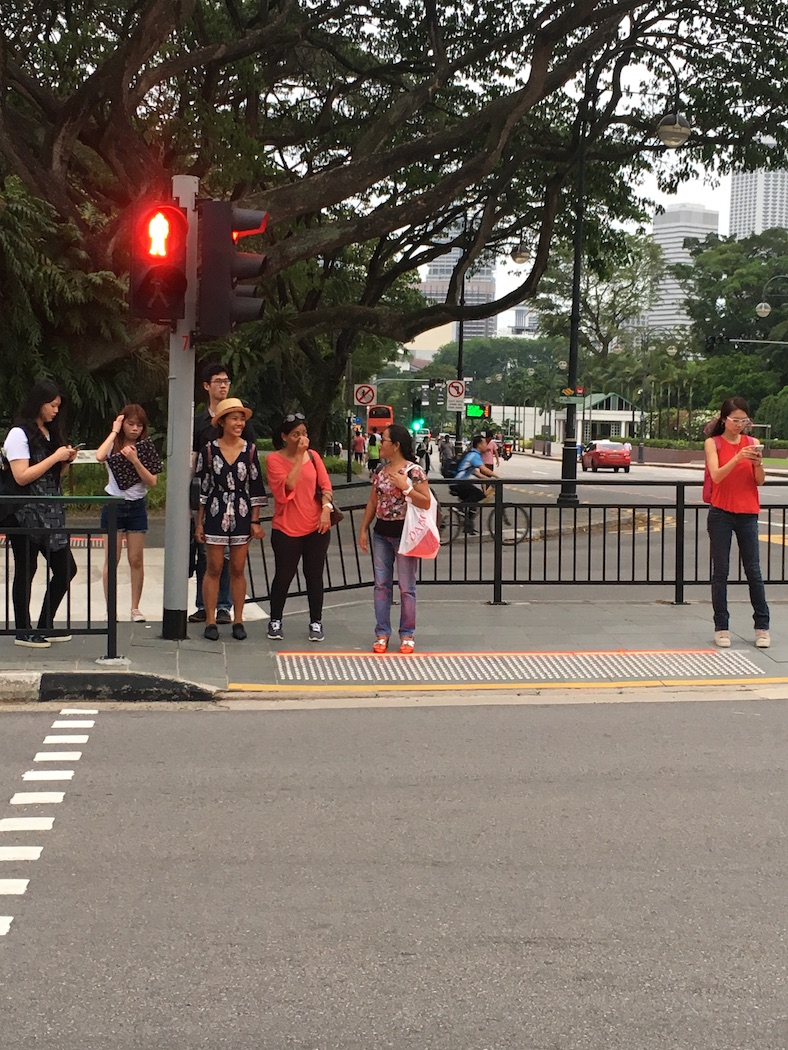 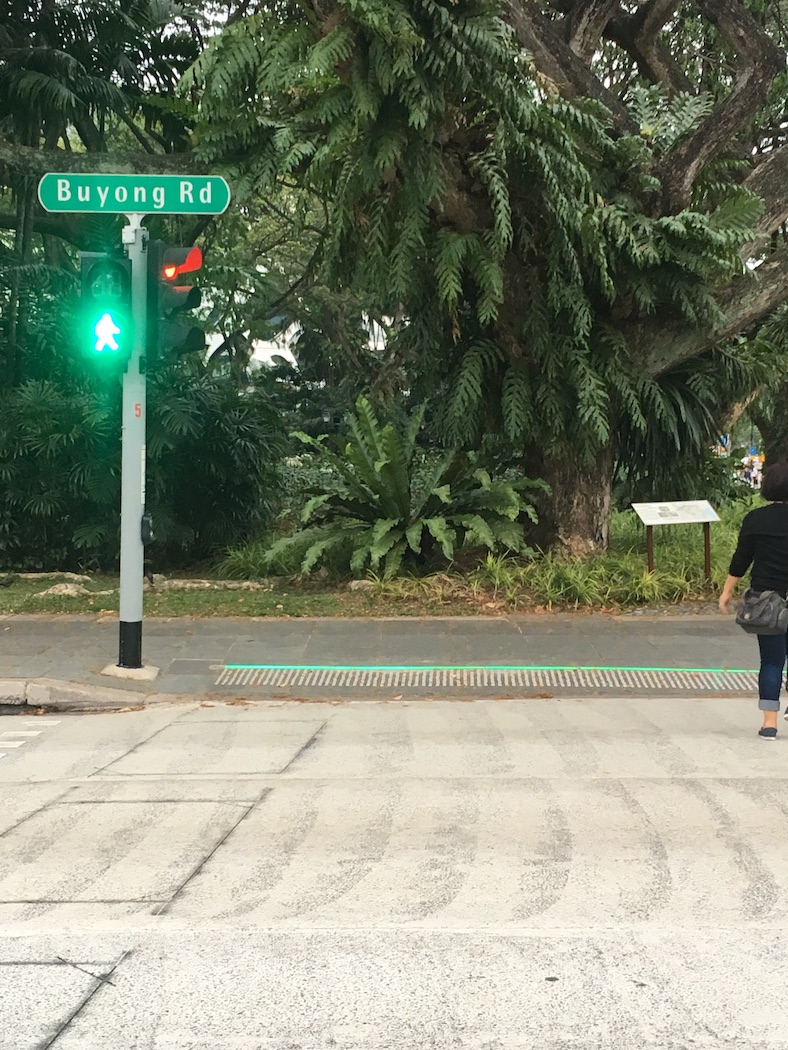 Why did the chicken cross the road? This is the set up to what is almost always a groan-worthy punchline.

Unfortunately, in the case of the humans, it’s not much better. Why did the human cross the road? To get to the other side.

But, have you ever wondered why sometimes it’s so damn hard to cross the road?

Sadly, it’s not particularly safe, either. In the US, more than 6,000 pedestrians were killed by automobile drivers in 2018 - 500 people a month, 16 a day. Approximately.

In general, it all starts with a crosswalk. Where there is a crosswalk, it is believed the pedestrian should be allowed to cross. This is of course disputable, as everyone who has almost collided with a car on a crosswalk can attest to. In Bangkok, they’ve even found it necessary to place traffic flags at this crosswalk, which pedestrians can hold in front of them to give them more authority to get cars to slow down and let them cross. 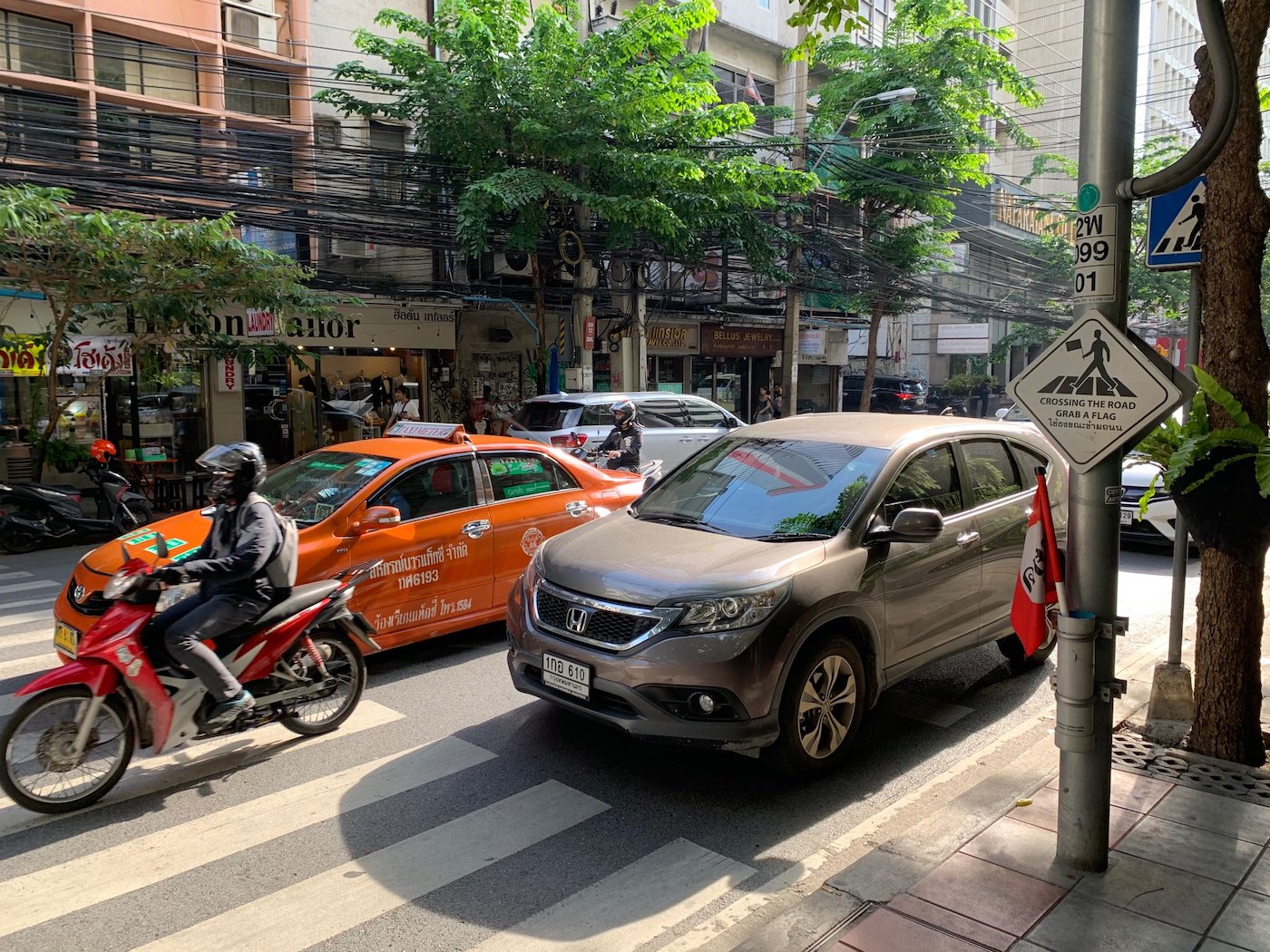 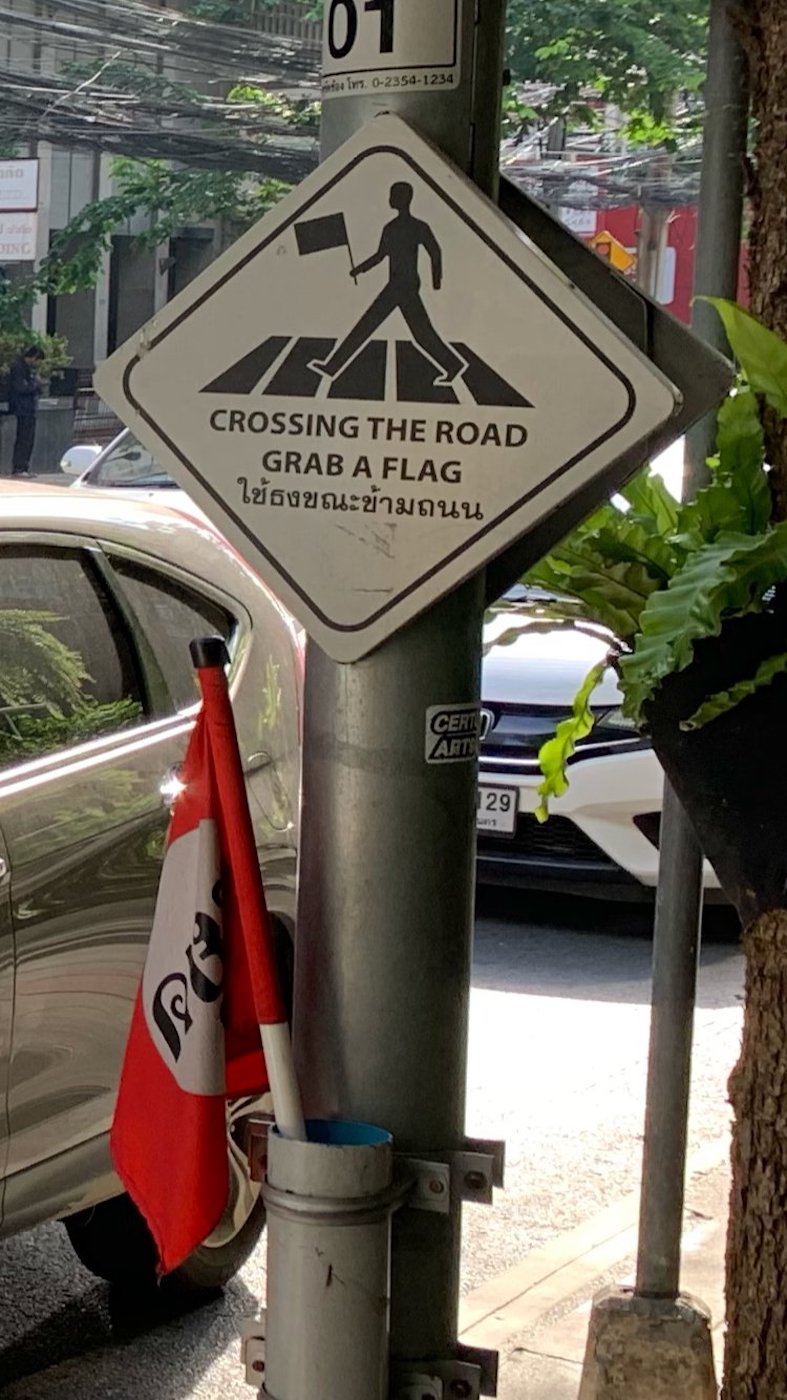 It goes without saying, where there is no crosswalk, the pedestrian has no right of way, and must allow cars to go in front of them. Even if there is no actual crosswalk anywhere nearby - because traffic engineers didn’t think it mattered if people could cross the road or not. These monks are trying to go from the wat (temple) to the bus stop without getting reincarnated. 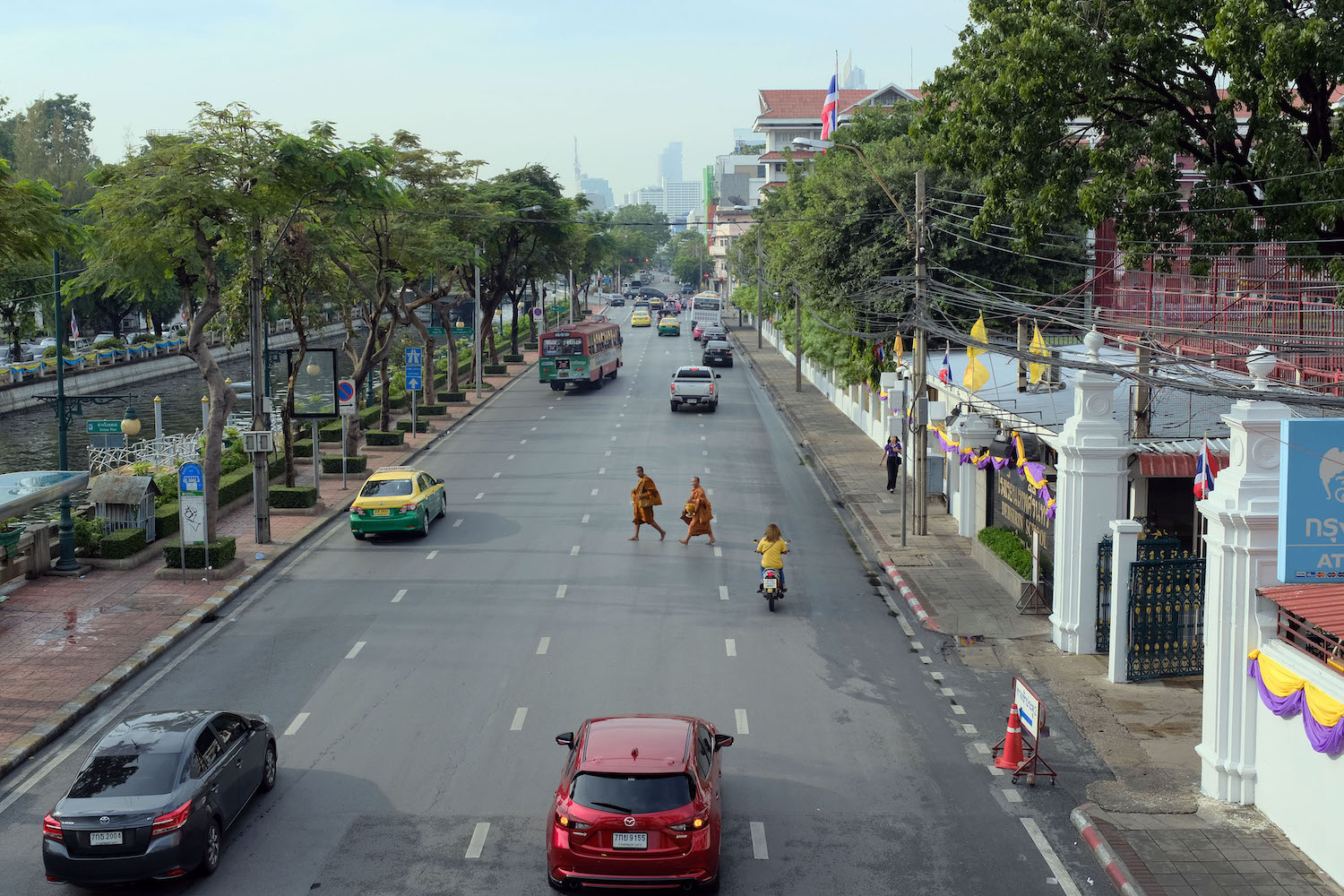 Some cities have tried to solve this problem by building a series of pedestrian overpasses, so that pedestrians can walk over the road. While it is a technically acceptable solution, it also increases the time and effort to cross a road by a factor of at least 10. Or a factor of infinity if you have a physical disability and can’t walk up stairs.

There is the indignity of standing at an intersection in the blazing heat or pouring rain, watching while car after car of sheltered, seated individuals are given priority to get to their destination. This intersection in Hong Kong Central shows dozens of people waiting at least 2+ minutes for the pedestrian light to turn green, all of them standing by waiting to give a handful of cars the right of way to drive through.

Then there is the indignity of having to cross TWICE when you want to get to side diagonal from where you are, while a car can simply turn left or right. Happily, some cities have started to address this particular issue with diagonal crosswalk, or “pedestrian scramble” that allow pedestrians to make this diagonal crossing. 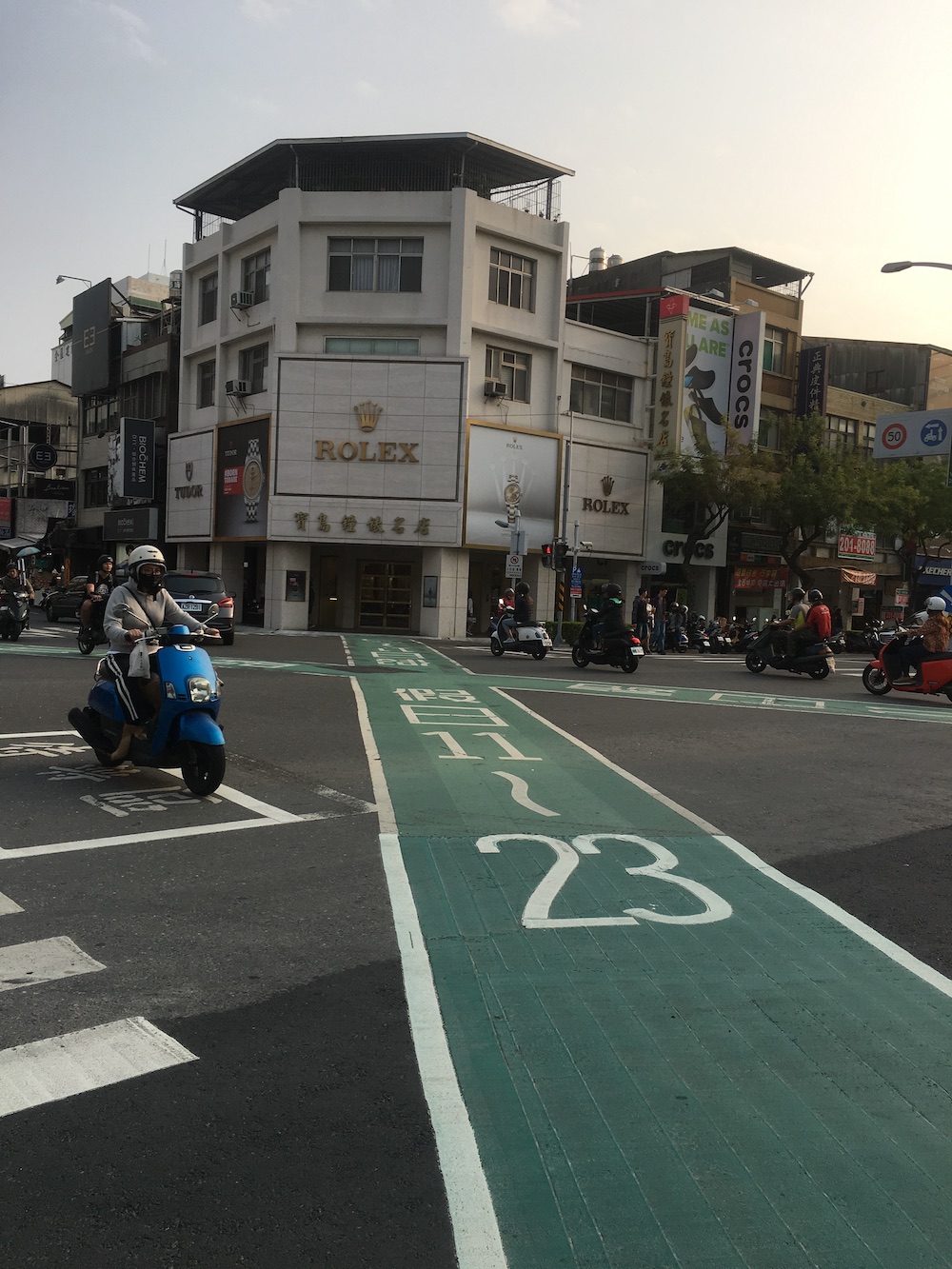 The most famous one is in the Shibuya neighbourhood in Tokyo, where hundreds of people may cross an intersection in a single traffic cycle (not my picture). Imagine how insane this situation would be without the scramble. 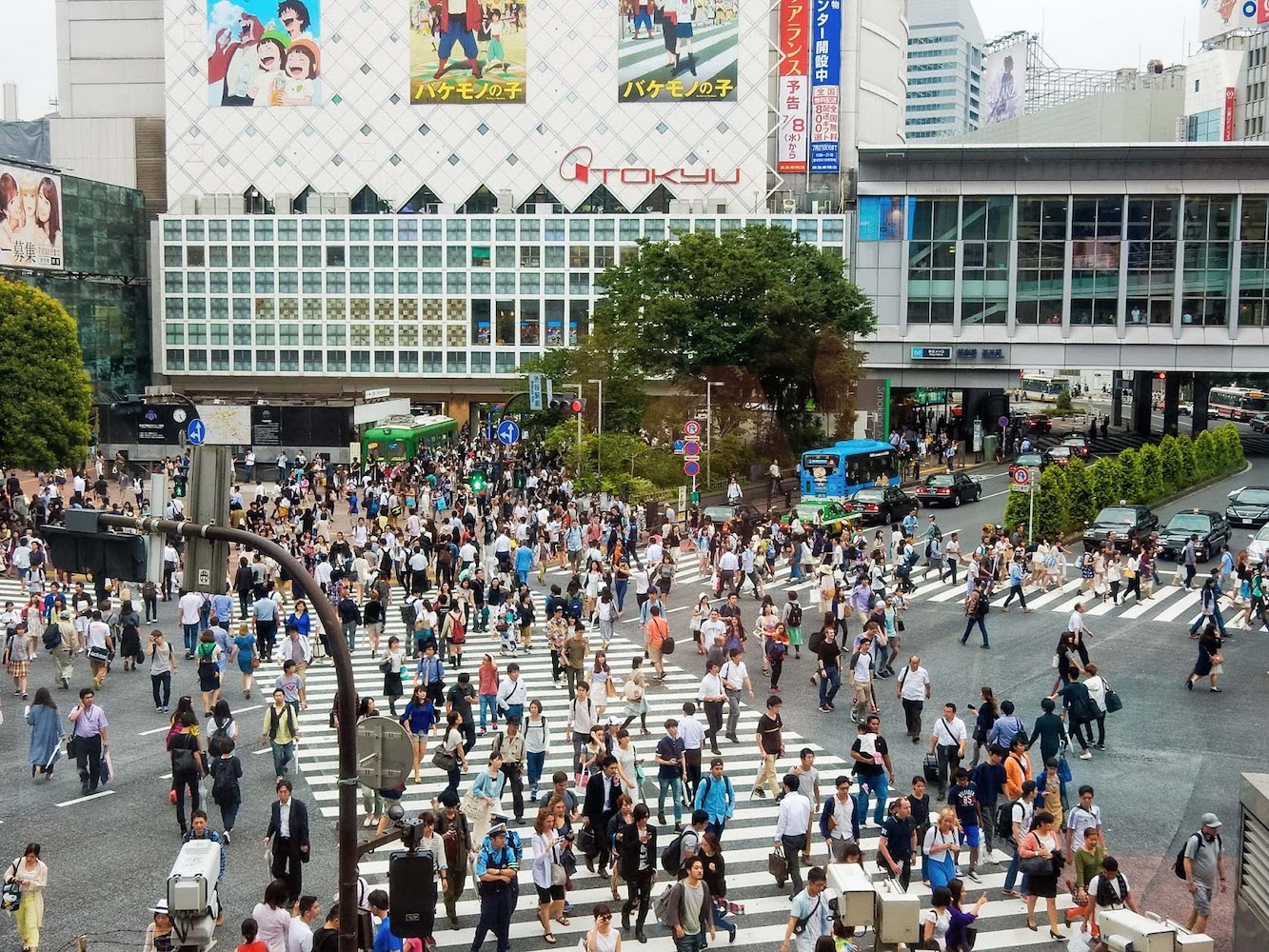 And there of course is the problem of really, really long road crossings. Not ideal when you have trouble walking long distances at a fast pace. Singapore has installed a system at some intersections that allows older adults to tap their “senior citizen” card to get more time to cross the road before the little red man starts flashing "stop-stop-stop". 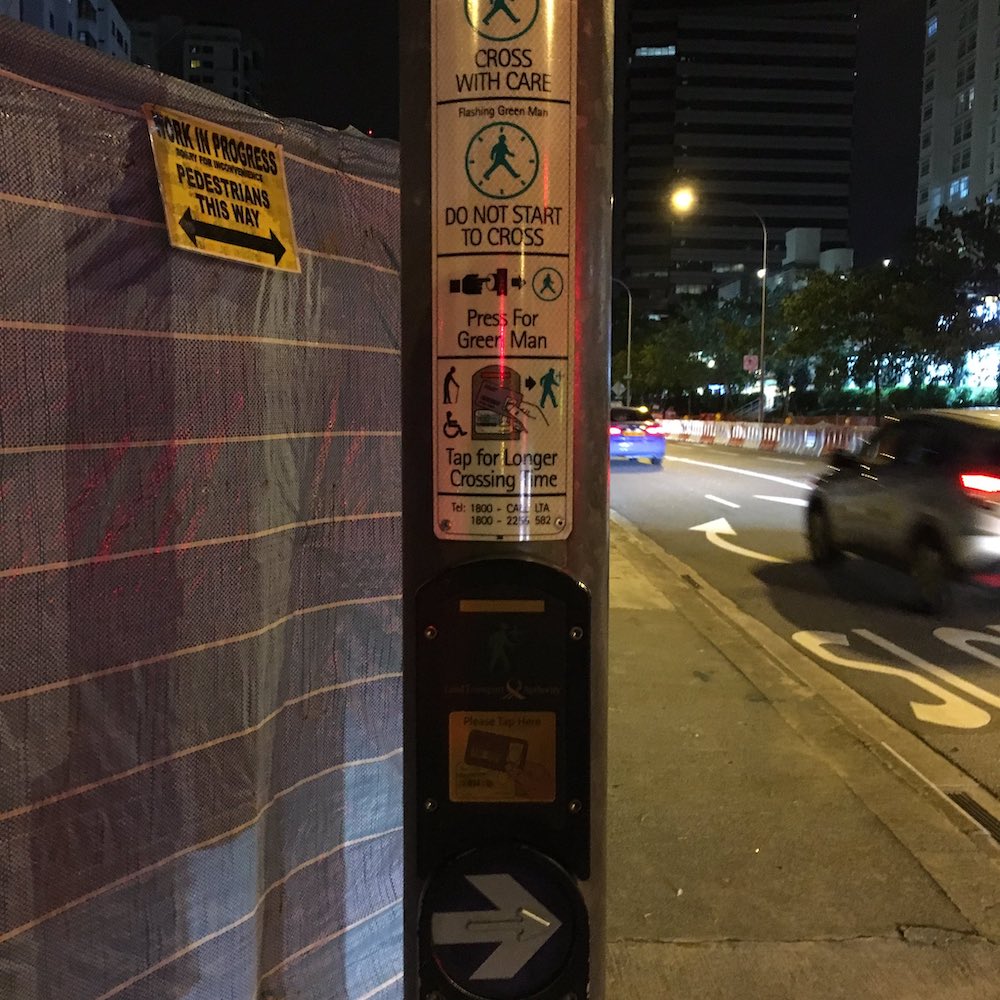 I can’t help think that a better solution would be to stop creating 10 lane highways through neighbourhoods. Narrower roads, with fewer lanes, that allow people to cross without waiting for ages, or having to run 100 feet at a breakneck speed hoping not to get t-boned by a 2-tonne vehicle driven by someone with half a driver’s license.

There is a morbid theory of the original joke. Why did the chicken cross the road? To get to the “other side” i.e., the after life. And what did the chicken think was the easiest way to do so? By crossing a road and getting hit by a car.

Cities should be for people (and chickens), not for cars.

Convenience and the City

Some of this fascination with smart cities is also driven by the assumption that we must continually make things more convenient for people. It should be more convenient to get groceries, to receive an education, to pay taxes, what have you. Convenience is king!

But maybe it’s time to question this underlying assumption. If we use the analogy of social media - Facebook is very convenient. It takes 2 minutes to set up an account, and then you can contribute to it whenever you want from your smart phone with a few quick taps on the screen. Neocities, on the other hand, is not convenient. It requires some thinking, some learning, some deliberation. But the effort also creates ownership, and creativity, and independence.

Getting food delivered to our apartments is very convenient. But there are also lots of negative externalities, like delivery drivers clogging the road and lazy people not having to go outside to forage for food. Being able to open Google Maps and find directions to the nearest Starbucks is convenient. But it also means that we spend less time wandering around the city, getting lost and discovering new places.

So, is there more to life than convenience? Yes. In fact, there is a fringe movement called the Slow Cities movement, which is characterised “by a way of life that supports people to live slow. Traditions and traditional ways of doing things are valued.” It follows other “Slow” movements - Slow Food, Patient Capital, even Slow Television - that exhort people to slow down, look around and smell the roses.

There are those who will say this is a very privileged argument, and that’s true. People who are busy or low-income would say making things -less- convenient is discriminatory against them. Time is money, but money is also time. Things that are not convenient are usually exponentially less convenient for poor people than for rich people, who can much more easily pay their way out of problems.

We also wouldn’t want to go the way of Jakarta or Manila, where Slow Traffic means setting out 2.5 hours before any appointment to get to your destination on time.

Who’s to say what is good convenience and bad convenience? What does the perfectly time balanced city look like?

While you ponder that, I’ll leave you with a picture of the world’s first Salmon ATM machine, a vending machine that allows Singaporeans to buy pre-portioned frozen Norwegian salmon at any time of day with a simple tap of the credit card for $3/100 grams. Who needs fish mongers? 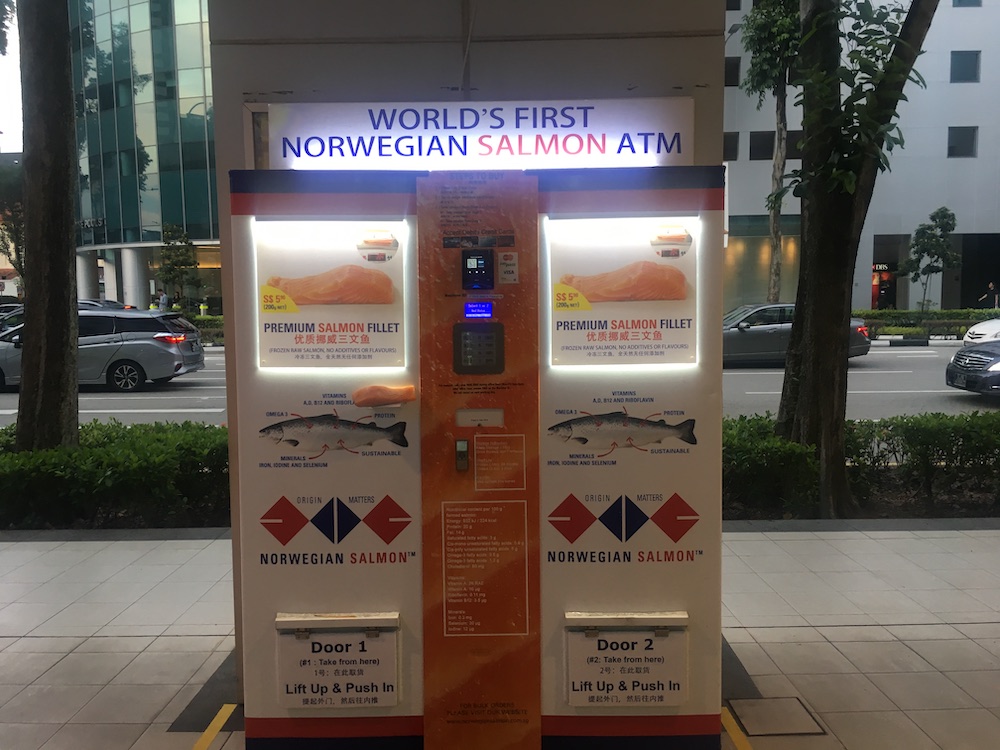